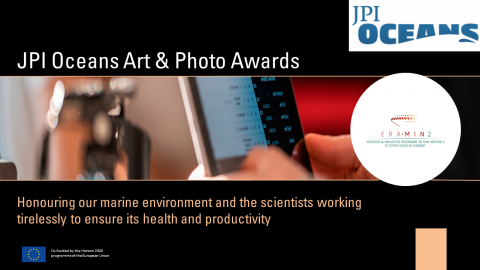 JPI Oceans and ERA-MIN synergies go back to the creation of the ERA-MIN 2 network, where both of them became mutual stakeholders.

Celebrating 10 years of JPI Oceans, the Joint Programming Initiative announces the Art & Photo Awards, honoring the marine environment and the scientists working tirelessly to ensure its health and productivity. Art and photography are vital to close the emotional gap between society and the marine environment. With these Awards, JPI Oceans wishes to bolster the role of visual arts in tackling the challenge of communicating about the Earth's largest ecosystem. Entries addressing the three interconnected priority areas of JPI Oceans are welcomed: Ocean Health, Ocean Productivity, and Ocean Stewardship & Governance. The competition is organized in two categories: the open competition and the JPI Oceans projects competition. For each category, a top three will be selected with the winner being awarded a prize of - €1000. The two runner-ups will each be awarded a prize of €500.

The ERA-MIN network supports this extraordinary initiative that honors and visualizes the excellent and tireless work of scientists to ensure the health and productivity of the marine environment, encouraging all the ERA-MIN community to participate, especially the researchers on deep sea minerals and environmental impact. The competition is OPEN NOW until the 20 December 2021.